The placenta clearly plays a critical role in reproduction but we know very little about the factors that stimulate and control it’s early development. Work in collaboration with Professor Graham Burton (Department of PDN) is focused on understanding what these factors are, how they are controlled, how they act on the early trophoblast and how they may be perturbed in pathological pregnancies. This work involves the use of next generation sequencing and complex cell culture models to characterise the factors and investigate how they act on trophoblast derived cells. This work is funded by a programme grant from the Medical Research Council. This work is a continuation of a longstanding collaboration in which we have identified the importance of oxidative and endoplasmic reticulum stress in the placenta; (see papers by Yung et al, 2014 and Cindrova-Davies et al, 2011 for examples). We are also interested in the relationship between capillary and villus growth in the placenta and use 3D image reconstruction to investigate this. 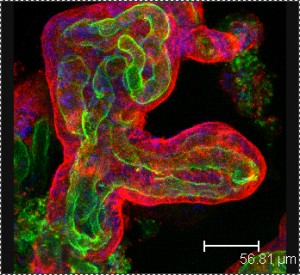 Ovarian cancer is the fifth most common cancer in women in the United Kingdom and one sub-type is the so-called clear cell carcinoma. This tumour type is an uncommon (approximately 10% of all ovarian carcinomas) and is actually thought to originate in the endometrial cells within the uterus. The type of cancer has a poor prognosis mostly due to late diagnosis.

in vivo imaging of tumour growth in mice

There is evidence of an association between endometriosis and clear cell ovarian cancer; (endometriosis is a benign gynaecological condition in which endometrial tissue grows outside the uterus, commonly within the peritoneal cavity). There is also some evidence that mutations in endometriotic cells may lead to the development of clear cell ovarian cancer. Some of the work in my laboratory is focused on specifically exploring this question as we have developed a mouse model of endometriosis, which allows genetic manipulation of the endometrial cells and also of the host environment. We are able to introduce specific mutations or knockdown specific genes in the endometrial tissue and then determine whether this alters the growth of the endometriotic tissue and whether this tissue progresses towards clear cell ovarian cancer. Techniques used in these projects involve the generation and use of genetically modified mice, lentiviral transduction to either knockdown or over express modified genes, in vivo imaging of mice as they develop lesions (see photograph to the left for an example of this). Some of the analytical tools we use to investigate lesion development include next generation sequencing (particularly RNA-Seq and ChIP-Seq). This work is funded by CRUK and STEPS. This work is carried out in close collaboration with Dr James Brenton.

The role of Paroxonase 3(PON3) in Development

We previously identified the paroxonase 3 gene as one being acutely up regulated in both the lung and intestine in the late stages of gestation (Belteki et al, 2010). We also showed that knocking out this gene led to embryonic lethality (Kempster et al, 2011). We have a programme of work to define why deletion of this gene causes embryonic loss. We have investigated the presence of the protein in early mouse embryos cultured in vitro. Immuno localisation indicates that the protein begins to appear in the late blastocyst and only in the trophectoderm cells. (For example see the picture below, which illustrates such an embryo). In embryos that have implanted there is further expression also in trophectoderm-derived cells. Other aspects of this project involves the generation of a conditional knockout which will allow us to specifically ablate the Pon3 at selected times during development and also in specific tissues postnatally. This work is supported by a MRC project grant. 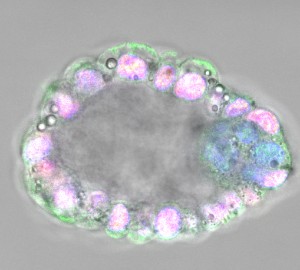 A key feature of my research is the combination of genetically manipulable models of reproductive processes and the study of relevant clinical human material. Particularly exciting is the use of next generation sequencing methods in the POPS cohort. I therefore co-supervise with Professor Smith several projects seeking to exploit these technologies in the investigation of fundamental questions of clinical relevance using samples collected from this study. Some of the analytical tools we use to investigate placental development and pathology include next generation sequencing – particularly RNA-Seq (mRNA, ncRNA and miRNA) and WGBS.